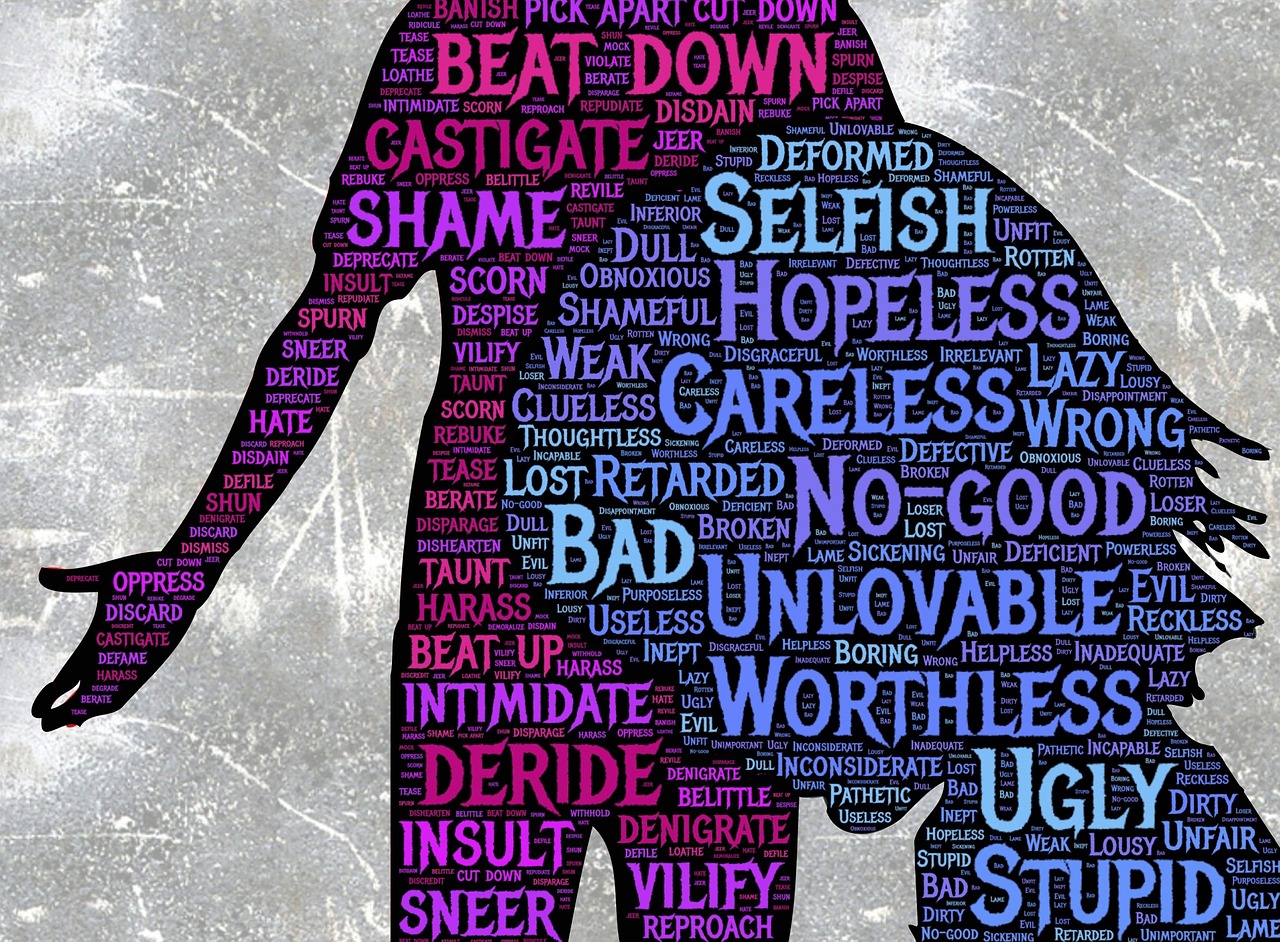 I’m writing today about why emotional abuse should be one of the seven deadly sins.  In my last blog, You Will Find Joy in the Oddest Places, I posted about Barbara Kinglove’s short story, High Tide in Tuscan. She says, that in her darkest hours she takes a good long look at something beautiful.  I’m taking a good hard look at something dark-the severity of emotional abuse; what it is, what it looks like and how get help.

What are the seven deadly sins?

According to Wikipedia they are pride, greed, envy, anger, lust, gluttony and sloth. I’m now adding emotional abuse which in some ways is a dangerous cocktail of them all.

What is emotional abuse?

An article called What is Emotional Abuse from the blog VeryWellMind describes it this way:

Emotional abuse is a way to control another person by using emotions to criticize, embarrass, shame, blame, or otherwise manipulate another person. In general, a relationship is emotionally abusive when there is a consistent pattern of abusive words and bullying behaviors that wear down a person’s self esteem and undermine their mental health.

Emotional abuse is one of the hardest forms of abuse to recognize. It can be subtle and insidious or overt and manipulative.  Either way, it chips away at the victim’s self-esteem and they begin to doubt their perceptions and reality.

Believe me, I know what emotional abuse is.  I was raised in an emotionally abusive home which not surprisingly led me into two emotionally abusive relationships. I was filled with self-doubt about most everything and lived in constant anxiety and fear.  I’ve done my homework – I will never get involved in another emotionally soul-crushing relationship, and I can spot an abuser in a nano second.

I’ve been to therapy (still am), workshops, read books, and journal. I also attended a six-week domestic violence course at WEAVE – Woman Experiencing a Violent Environment.   After one of my ex-husband’s violent, jealous rages, I called WEAVE. That was the day I knew I had to get out of the relationship no matter what.

One of my many abuse stories

Our family went to take pictures for my son who was graduating from high school.   His funny, goofy, friend came along and was entertaining all of us with his jokes and trying to get our son to smile for the camera (he was very serious).  He was entertaining everyone, that is, except my husband—who had a vicious scowl on his face.

After we finished with the pictures, we left the studio and walked to our cars. My son’s friend came up and hugged me good-bye.  All of a sudden, my husband, in a violent, jealous rage, grabs the friend, pushes him away from me and screams:  THIS IS NOT SOME KIND OF A JOKE, WE’RE NOT PLAYING GAMES HERE, WHO DO YOU THINK YOU ARE ACTING THIS WAY … and then, red-faced and tyrannical, he started hurling sexual accusations at us.  It was a nightmare. My heart was pounding, my breath was shallow, and I could feel the deep humiliation riveting through my body.  It was so traumatizing–I wanted to run for my life, but there was nowhere to go.

Why emotional abuse should be one of the seven deadly sins

My husband had one mission that day – to control, manipulate and destroy my spirit. He hated it when he saw me happy with other people and he would do his best to stop it. “Don’t laugh too much, don’t talk too much, and most of all don’t be you.” He didn’t care that day that we were with the kids (ages 10, 12 and 17), my son’s friend, in a public parking lot.  That’s how abusers work – they will humiliate you anytime, in front of anyone and anywhere.

Anytime my husband saw something he didn’t like, he accused me of being promiscuous. He could take something as benign as a handshake or a smile, turn his rage on me, and create an absorb story, laced with sexual accusations.  These jealous outbursts were common in my world.  I was anxious and afraid whenever we went out in public, with friends (we didn’t have many) or family, that he would go into one of his tirades. He was a ticking time-bomb that could explode at any second.  That is why emotional abuse should be considered one of the seven deadly sins.

The day after this soul crushing experience, I called WEAVE. I was sitting in a Whole Foods parking lot, lonely, afraid, anxious and hopeless. I dialed the number; my hands shaking.  I was so emotionally battered but he hadn’t destroyed my spirit completely–it was fighting for its life. I knew I had to do something.  I’d been living with this craziness for decades.

I was afraid WEAVE was only for women who had experienced physical abuse. The man who answered the phone was not only kind and compassionate (it brings tears to my eyes just thinking of it) he said verbal abuse is a HUGE part of domestic violence and it’s just as damaging as  physical abuse. He said the things I described–jealousy, control, humiliation, threats, lashing out at you in public, were part of the abuser’s personality.

That conversation gave me hope. It was the first time someone had validated my feelings about this debilitating, soul crushing abuse. A former therapist, untrained to recognize verbal abuse, advised me to talk to my husband when he wasn’t upset. Society tends to give the emotional abuser a break.  That’s why emotional abuse should be one of the seven deadly sins.

After we separated, I started dating another guy.  My daughter was graduating and I invited him to the ceremony. My ex-husband and I sat in the front rows of the auditorium that were reserved for the parents. It was such a wonderful and poignant graduation.  It was an all-girls school and the lovely graduates were dressed in stunning white gowns, shimmering white gloves, and carried red roses. These young girls were preparing to leave one era behind and start another.  It was especially touching not only because they were finishing high school and everyone was going in different directions, but the school where they’d made so many memories and lasting relationships was closing forever.

Everyone seemed so happy. After the ceremony, I introduced my boyfriend to my ex.  Big mistake.  Right there, in front of the auditorium, where all the families, friends, and white gowned, glowing graduates were gathered for this poignant celebration, my ex started yelling at my boyfriend. He screamed at him to get out of there and that he had ruined our family.  He went on and on – in front of everyone.   My poor daughter was standing there, on HER day, experiencing this humiliation.  She grabbed her boyfriend’s hand and said: “let’s get out of here.” Public humiliation and why emotional abuse should be one of the seven deadly sins.

Battling it out in court with the abuser

My ex continued to antagonize me in court for ten years. He paid his alimony and child support for a year and then stopped. He continued his abuse by filing incessant motions to bully and wear me down, just as he had in our marriage. For ten years, he mostly ignored our kids so he could get his revenge. He even went to the appellate court (they refused to hear his case). I had an attorney but after about two years I couldn’t afford it so I represented myself.  My family and friends encouraged me to continue the fight because he owed me the money. I never collected the alimony, but the child support court came down hard on my husband and was going to send him to jail if he didn’t pay the support, so he did.

After ten long years I hired an attorney who told me: “look, if this guy hasn’t paid you in all these years, he’s not going to.” I decided to get on with my life and told her to end it. I wish I’d done it sooner. It was so freeing to get away from his court abuse.

As I’ve mentioned before, after my divorce I started dating someone else. It started out great.  He had three years of recovery from alcohol and drug addiction and I thought I’d found the man of my dreams.  However, a few years later, he got back into drugs and I didn’t know. I hadn’t done any work to heal from the abuse in my marriage, so I stepped out of the frying pan and into the fire.  You can read about it in my post How I was Manipulated by a Drug Addict. The relationship ended after eight years because he wanted a girlfriend who enabled his drug use. Tragically, five years later he was brutally murdered, most likely buying drugs.

During those five years I was able to start healing.  It’s been six years now and as I said above, I’ve done my homework to let go of the devastation caused from years of living with verbally abusive people. It’s been a slow process, but it has given me so much freedom.

If you suspect that you’re in a verbally abusive relationship call WEAVE if you live in California. Otherwise call the National Domestic Violence Hotline. Otherwise call the Read as much as you can. You can check out books on emotional abuse at amazon and keep reading up on it. Get therapy if you can. Join a support group.  Al-anon is great if you’ve lived with anyone who has an addiction and it’s free.

Why should You have only one life to live so don’t let it be destroyed by emotional abuse. Get help and start to create your own beautiful, unique Masterpiece.

Until next week and as always email me or leave a comment below so we can start the conversation.