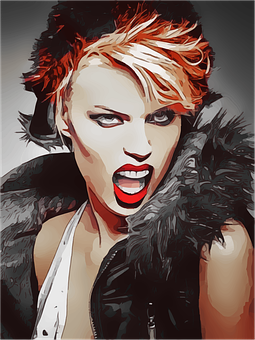 I’m going to give you an example of what one of my rage-aholic sisters did after my mom died to show what not to do when you’re angry.

She was so cruel, you’d be stunned to think that a person, who for years swore up and down about how precious her family was, could turn her rage on all of us until it vibrated into our bones. For more details read my post Personal Growth Through Chaos. I’ll just give you the highlights or maybe I should call them the “scumbag dirty lights.”

Her boyfriend, against my vehement pleas, was hired to take care of my 93 year old father, who was in need of a caretaker. He was (and still is I assume), unemployed, living with my sister and had already tried to scam my dad for $50,000. As I foresaw correctly, he tried to kill my dad, get power of attorney over his estate and run to Spain with the cash. I don’t think he planned on taking my sister with him. But, man, talk about loyalty, she stood by her man. This is what not to do when you’re angry.

Thanks to my dad’s loyal friends, who scumbag was bragging to about his travel/exit plans, one of them told one of my brothers and the next day two other brothers were on a plane to Montana. They went to our house, police at their side, and ousted him.

Later we found out that scumbag was drugging my dad with ambien, per my sister’s instructions. She happens to be a nurse practitioner, God forbid My older brother, who was well-intentioned and had been handling my dad’s medical care for decades was not informed.

Thank God for my brothers

Thank God for my brothers who come to the rescue (and I thought to myself–I told you so!) After my dad was apprised of the situation he was really grateful for the rescue. A few days later he called my sister and told her to get away from scumbag — that he was a con artist. Her response was verbal vomit as she screamed at my ailing 93 year old father: fuck off, fuck off, fuck off. This is what not to do when you’re angry. My brother, who was standing by, took the phone from my dad and hung it up.

Be careful who you’re loyal to

Well sis, be careful who you’re loyal to. A few weeks after the venomous phone call, my dad went to his attorney and wrote her out of the will. He refused to have that scumbag get his hands on the money. My dad passed away on August 24, 2019.

Fast forward one year and six and months and she’s contesting the will. And I’m sure the salivating hyena, is lurking in the background, waiting to get his sticky hands on that money. She says she wasn’t notified of the probate, but she wasn’t notified because she wasn’t an heir. Per her phone request, the attorney sent her a copy of the will shortly after my dad died. She was notified. She’s also saying my dad was incapacitated. He was sharp as a tack until the day he died.

Communication for her = rage

Whenever we’ve tried to communicate with her, all we get is rage, vitriol, death wishes and unconscionable threats–verbal violence. That’s all she’s got in her sparse arsenal. If you read the post mentioned above, you can get more details. She’s like a hungry wolf, salivating and ready to kill, unrelenting. She never changes her approach. As they say, you can’t change a pickle back into a cucumber.

But, you can leave the venom out

We could strike back, spewing our own venom, but that’s what she wants. Her deciding to stick by this guy who almost killed our dad and took his money and dealing with her fire breathing rage makes my blood boil. But I won’t stand in her firey pathway. We’ll see how her lies and fire breathing stand up in court. The attorneys can deal with her “heat.”

Here’s what not to do with anger

I have no control over my sister’s toxic behavior. One of my brothers’ and sisters’ emailed her before Christmas about selling her portion of the house, and she fired off more of the same. She’s been leaving wreckage in my life for decades and I won’t put myself in harm’s way. There’s no love on her part — only hatred and abuse and I don’t live in that world. I know I’ve felt sad about this sometimes, but not right now. I wonder what my parents would think. To quote the great Albert Einstein:

We cannot solve our problems with the same thinking we used when we created them.

And we can’t. The moral of this story is: what not to do when you’re angry.

Here’s a book to check out (I wish my sister would read it) for some wisdom on cooling down. Anger: Wisdom for Cooling Down the Flames

I’m changing things up her a bit at Required to Inspire so stay tune — great things are ahead.