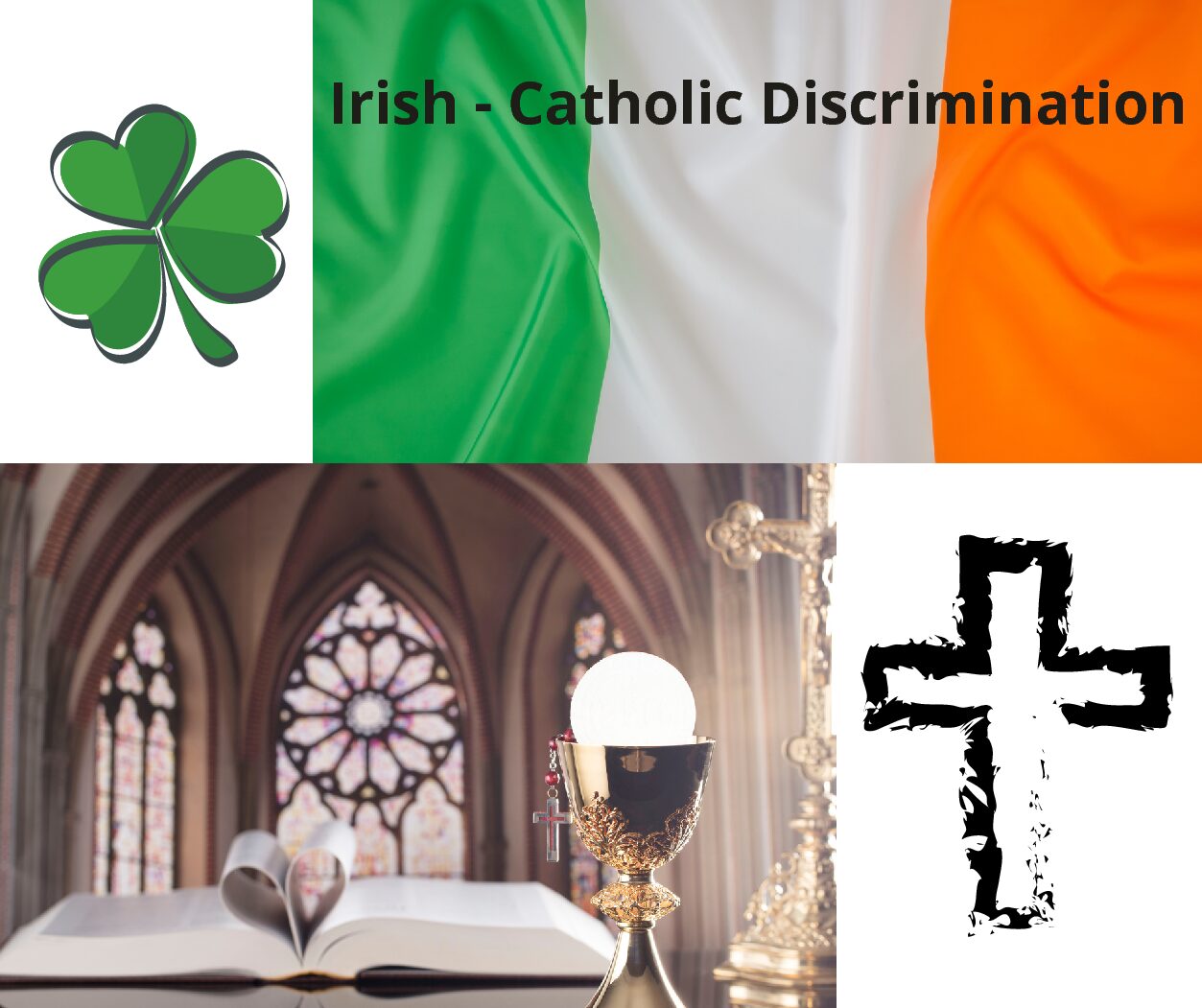 It’s almost a badge of honor to be Irish these days—especially around St. Patrick’s Day.  However, my dad, back in the 1940’s, experienced discrimination. Not only because he was Irish, but also because he was Catholic.  When he searched for jobs as a twenty-something, he saw signs in business windows that warned: Irish need not apply. He also saw them weaved throughout the classified ads. Here begins a discrimination story about Irish-Catholics.

In the early 19th century, the Irish were considered to be drunkards and unsuitable for citizenship.  My dad’s parents were immigrants, but he wasn’t. It was ironic he married my mom, who was a Protestant. Protestants felt they were superior to all races (but in their case, love conquered those barriers). When they married, my wealthy, real-estate savvy grandmother gave my parents a small, modest wedding to show her lukewarm approval.

Protestant Reformation came to the United States in the early 17th century, and shaped American culture in the 18th century. The Protestants dominated American religious life in the 20th century. They even pushed their religious agendas to the public school curriculums.

A remarkable Irish-Catholic Bishop, John Hughes, born in 1797, immigrated from Tyrone, Ireland in 1817.  He was a radical Irish-Catholic and was fond of saying: for the first five days of my life, I enjoyed social and civil equality with the most favored subjects in the British Empire…that status ended..the day of my baptism. American, The Jesuit Review.

According to American, the Jesuit Review, Bishop Hughes spent most of his life fighting for equality for himself and the Catholics and for respect from the Protestant elite. He became famous for his larger than life personality and his public battles with the government and other religious figures.

The Protestants nicknamed the famous Bishop as Dagger John. He had a talent for organization and built a huge community of Catholic primary and secondary schools in response to Protestant discrimination. Catholic educators in these schools taught generations of children about Catholic dogma and how to live the Catholic faith.  The network of Catholic schools the bishop built were supposed to get tax money to help support them, but they rarely received anything.

Immigration in the 1920’s and the Klu Klux Klan

We associate the Klu Klux clan with hatred and violence towards African-Americans. But, they hated anyone who threatened their white-Protestant ideals. They said people who didn’t fall into this Puritan group were a threat to Americanism and its values.

The Klan and their lies

The Klan spewed their anger on the Catholics regaling the public with bloated tales of nuns whipping young girls with exhilarating pleasure.  They  accused the Knights of Columbus (KOC), a Catholic service group, of torturing and burying all non-Catholics alive.  They claimed the KOC ripped open pregnant women’s stomachs, and crushed their babies’ heads against a wall to destroy anyone who wasn’t Catholic. This was all wildly false.

My dad’s story of discrimination

I understood little of the gravity of Irish-Catholic discrimination until I researched it.  When I was in grade school, we lived in a small town called Manistee, Michigan.  My dad and some of his Catholic friends desperately wanted to build a Catholic High School.  He and his friends would go to people’s homes in the evenings to ask  them to donate money.  He said many people were so adamantly against it that sometimes he thought he was going to get flagellated. I can imagine him and his friends high-tailing it out of the home of some raging Protestant family who held deeply rooted hatred towards Irish-Catholics. Hopefully they had someone waiting in the getaway car.

The wheels of discrimination were running on full-speed when I was growing up, just like today. And my courageous dad was out risking his life, fighting for a Catholic High School education for his kids and the community. Maybe they should have called him Dagger Jim.

If you liked today’s story, leave a comment below about your discrimination story.