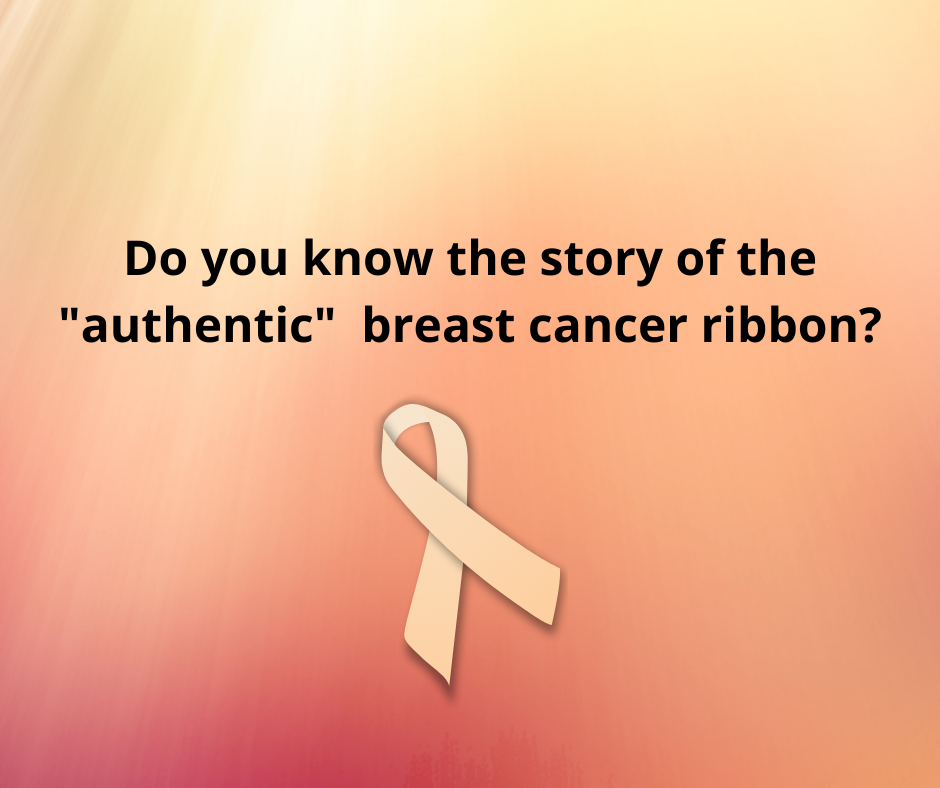 If you’ve been reading my blog over the past few weeks, you’ll know I’ve been writing about authenticity. Today I’m going to share a story about authenticity with you. Do you you know the story of the “authentic” breast cancer ribbon?

I was diagnosed with breast cancer just short of five years ago. Pre-breast cancer diagnose, I noticed all the hoopla around breast cancer awareness: pink ribbons, balloons, stuffed animals, clothing, jewelry, etc. Most likely, I attended an event or two to help support breast cancer research.

In February, 2016 my doctor found a lump in my breast and sent me for a mammogram. On my appointment day I arrived at the radiology department, got checked in and they called me back a few minutes later. In the mammogram waiting area I saw pink stuff everywhere: pink pens, little pink pillows, pink ribbons, and pink hearts to name a few. The deal was, I’d get my mammogram and if they found anything they’d call me back to do an ultrasound. I finished the mammogram and was sent to wait in the “pink room.” There was a woman there who hadn’t had a mammogram for seven years and at the urging of her pastor, went to the doctor. It turned out she had cancer so she had the surgery, and chemo. She’d had a mammogram too and was there waiting to see if she got called back in.

Well, as I sat there hoping they wouldn’t call me back in, they called me back in. While they were doing the ultrasound, you could’ve heard a pin drop. My arms were raised over my head and they were killing me. Finally, the radiologist said, “we need a biopsy, can you come back tomorrow?” I thought it would be important to show up. I sheepishly asked her how the ultrasound looked and out came the words–“it looks suspicious.” My first thoughts were this can’t be happening to me! Am I going to die?

I stayed with my parents for a few days while we waited for the results. My dad was a retired doctor and my brother was a practicing doctor. My brother, who was out of town when I got the initial diagnosis, came over when he got back and proceeded to gave me the “cold, hard facts.” My overwhelmed brain did its best to listen. He said to read breast cancer websites to learn as much as I could. Are you kidding? I was terrified already and wasn’t about to find out more terrifying facts about this potentially fatal disease. After my brother left, my dad said (referring to my brother’s cold-line delivery of the facts), “well — I wouldn’t have quite handled it that way.” Meaning he would have delivered the information in a gentler way ❤️.

Waiting for the diagnosis

We waited for what seemed like an eternity for the results– five days. Meanwhile, my dad scurried around calling his doctor friends for advice. One of them called when he wasn’t home and I unfortunately answered the phone. This doctor was a complete asshole. He asked me questions and stated it was typical for a 58 year old, post menopausal female to have the most fatal kind of cancer you could have! Ok–he didn’t say the fatal part, but he implied it. He was cold and treated me like some sort of specimen🔬 🧫! Suffice it to say, I was not in a prime emotional state and all this medical speculation was terrifying me! I hate that doctor to this day and I don’t hate anyone. It’s like the Justin Beaver song: my momma don’t like you and she likes everyone.

So when am I going to tell you about the “authentic” breast cancer ribbon?

Ok, ok–I’m getting to it. Long story short, I was diagnosed with HER2 positive breast cancer, stage 2A and they caught it fairly early. I had surgery, chemo, and yes, lost most of my hair except for some peach fuzz. I consider myself lucky looking back on it. I’ve known women who’ve had eight months of chemo and then radiation and were horribly sick. My chemo treatments were once every three weeks for two months and no radiation, so compared to others, it was a cake walk. And my cancer has targeted medication to stave off the cancer. Some other breast cancers don’t, so I was lucky in that arena too–and so far so good–no reoccurrence and I’m healthy and doing fine.

As most of you know, October is breast cancer awareness month and for the first few years after my diagnosis, I would donate to the cause, usually at the grocery store, or some other retail outlet. But as time went on I started to feel anxious and even angry about this breast cancer awareness month. At first I thought it was because I’d actually had breast cancer and it made me nervous, but you know how sometimes you have those nagging feelings or intuition and don’t quite trust them? Well that’s what was happening to me. I somehow knew something was askew, but couldn’t quite figure it out.

The article that changed everything

The article that changed everything for me, and helped me understand my October Breast Cancer Awareness inner grumblings was about the original breast cancer ribbon. In this article, The Story Behind the Pink Ribbon, you get the real facts:

Charlotte Haley, who had battled breast cancer, introduced the concept of a peach-colored breast cancer awareness ribbon. In the early 1990s, the 68-year-old Haley began making peach ribbons by hand in her home. Her daughter, sister and grandmother had breast cancer. She distributed thousands of ribbons at supermarkets with cards that read: “The National Cancer Institute’s annual budget is $1.8 billion, only 5 percent goes for cancer prevention. Help us wake up our legislators and America by wearing this ribbon.”

A bit shocking to say the least-only 5% went to awareness. What happened next is Estee Lauder and Self magazines got wind of what Haley was doing and asked if they could partner with her. Haley refused saying she wanted nothing to do with them–that they were too commercial.

How the ribbon got “pink”

So “Self” in all its wisdom, consulted with their lawyers who judicially advised them to just choose another color. The article goes on to say: It chose pink, a color that focus groups say is soothing, comforting and healing — a far cry from what breast cancer really is. Soon Charlotte Haley’s grassroots peach ribbon was history, and her original idea became the pink ribbon that has come to be known as the worldwide symbol for breast cancer.

You know when Corporate America gets involved it’s mostly about money. Haley, who’d battled breast cancer, along with her daughter, sister and grandmother, was motivated to help women with breast cancer prevention and awareness–no monetary strings attached. My grandmother and two of my aunts had breast cancer so it was no stranger to our family. Don’t get me wrong–I can’t even articulate how important breast cancer awareness is and the pink ribbon is the symbol for it. SO PLEASE–GO SEE YOUR DOCTOR AT LEAST YEARLY (maybe more if it’s in your family) and GET YOUR YEARLY MAMMOGRAMS AND ANY RELATED TESTS RECOMMENDED BY YOUR DOCTOR. And as I’m sure you’ve heard EARLY DETECTION IS KEY!

So I just wanted to make sure that we honor and give credit to Haley for her world-wide, life changing contribution to breast cancer prevention and awareness. Be aware and the next time you see the “pink” ribbon, remember the “authentic” ribbon was “peach.”

I hope you enjoyed this story of the “authentic” breast cancer ribbon. Please leave a comment below and share your story or a friend or relative’s story about breast cancer. Or click the link below to send me an email.

Until next week—from my pen ✍️ to your heart ❤️–Kathy