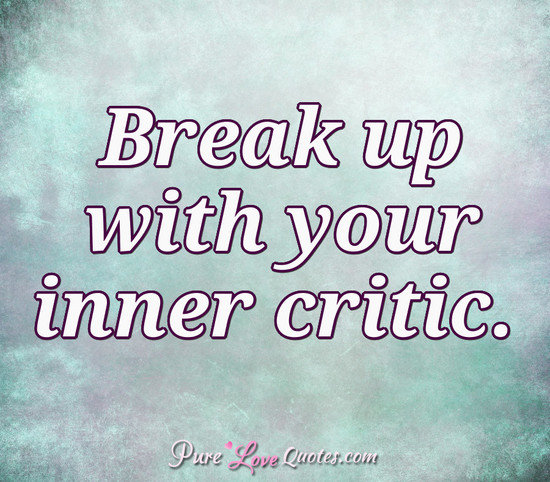 Are you tired of that nagging voice that always tells you you’re not good enough, or that you’re dumb, less than and on an on? Well in today’s blog you’ll learn about your inner critic: where it comes from, its role, what it is, and how to send your inner critic to its room!

Where your inner critic comes from

Our world constantly reminds us we’re not good enough. We’re blasted with 1000’s of ads everyday telling us to lose weight, try Keto, look younger, be fitter, find your passion, take course upon course to improve your skills, be a better leader, boss or employee, a better partner, meditate, lift weights, take supplements for energy, brain power, better sex…and that list just exhausted me😫! How about all those FOMO social media posts?

Don’t get me wrong. Some of those things are great, but trying to do EVERYTHING is impossible and leaves you feeling you’ll never measure up. In comes the inner critic to let you know of all those areas of your life where you’re falling short. You can feel overwhelmed, stressed and depressed😭 😭 😭!

There are more severe cases where your inner critic takes on the voice of the person who abused you physically or emotionally as a child or an adult. It could also be a neglectful or emotionally abusive partner, a narcissistic boss or even friends.

What is the inner critic’s role? Believe it or not, it’s trying to protect you from getting hurt. It’s a defense mechanism you developed in response to being traumatized and it makes you feel ashamed and unworthy. It’s a neurological response to trauma where your brain never got to fully process the experience. So when you get triggered from a past trauma, you have this voice, the inner critic that shows up to shame you.

Let’s say you think you had a decent upbringing. Your parents provided everything you needed physically, but they neglected you emotionally. If you showed them what excited you or something you wanted to do, they didn’t care. Maybe they let you do anything you wanted, and gave you little guidance about what was right and wrong. So at 13 you started drinking and doing drugs–probably to get their attention, but to no avail. Since they didn’t care, you decided what you found awesome or even disgusting, didn’t matter. Your inner critic, like your parents, reiterates that you shouldn’t get enthusiastic about something because it’s not important—so you ditch the idea. For awesome information on childhood neglect, read Running on Empty by Jonice Webb Ph.D.

Maybe you had an alcoholic parent who blew-up at the slightest provocation. You learned to walk on eggshells and not make the alcoholic angry. And since you could never please them, you lived in fear and felt you could never do enough. So you threw in the cards on what mattered to you because it was too painful or you got yelled at or maybe even abused. Now you focus your time pleasing others and not causing conflict as your inner critic cheers you on. That’s why it’s important to learn to send your inner critic to its room!

Our never ending demands to be “perfect”

Or, as I mentioned above, the pressure to be perfect: look perfect, dress perfect, have the best body, have the best job, the best workout–whatever! And, you can never fit it all in so you always feel like you’re falling short😭!

In steps shame and the inner critic to protect you. It’s a survival skill you developed to tolerate horrible treatment or abuse and it wants to keep you from getting hurt. It wants to protect you from those people that neglected, abused or made narcissistic demands of your daily life (or still do).

Let’s break this down

We’re made up of a lot of different parts. Some strong, some medium, and some vulnerable. Again, depending on the situation–whether it’s severe abuse or the incessant demands of daily living, the shaming inner critic thinks it’s protecting you from getting hurt again like you used to. It takes on the form of whoever it was that shamed you and continues to talk to you like they did.

One part of you–your inner critic, is trying to protect itself from getting hurt like it did in the past. But that shaming inner-critic is only one part of you--not all of you. The mind can be divided into parts and the tough parts can take care of the vulnerable parts.

You need to identify the culprit–the part who’s doing the shaming. Let’s call a spade a spade and identify it as the inner critic. Get curious about it, where it came from and what it’s saying. Ask yourself how you feel towards it and then…

Send your inner critic to its room!

Call in the Geek squad when the inner critic pops-up. Ask your stronger parts, let’s say your charm, warmth, intelligence, and creativity, for permission to send the inner critic to its room — like for a time out. Your other parts may be feeling a bit agitated by the inner critic, so you have to ask them to relax so you can figure out what to do.

Ask your tough parts how they feel about the inner critic. Chat it up a bit–maybe they’ll say that it’s doing a lot of damage, its constant negativity is exhausting and they’d feel a lot better without it. Figure out how it got started, who started it and how long it’s been hanging around. Talk about it as long as you want–until you all feel you’ve settled things.

Next, you and all your strong parts go to the room where inner critic is. Ask it what compels it to do this behavior. Ask it, if it stopped doing its job what would happen? It might say: remember when x,y, z happened? I don’t want that to happen again, so it’s my way of protecting you. You can tell it you appreciate how it tries to protect you, but you’d rather have it work with you–not against it.

A conversation with your inner critic

You: Why do you always remind me that I’m fat and need to lose weight otherwise no one will like me?

You: Really, how are you protecting me?

Inner critic: When you were growing up your dad and siblings used to laugh at you and tease you all the time. They told you over and over again how fat, stupid and ugly you were and it really hurt your feelings. So I remind you about it so others can’t hurt you in the same way as before.

You: Okay and you’ve done your job well because you really sound like those people that used to laugh and tease me.

Inner critic: Yep–I’ve got the skills, but it’s to protect you.

You: Ok–I get it, but it’s really not helping me and I’d like you to think how it would be if you stopped doing that?

Inner Critic: Well, it would be pretty hard — I mean who’s going to protect you from getting hurt? Besides, we’ve been together all your life.

You: Well, I was thinking maybe you could have a new role. When those shame triggers come up I’d like you to be a safe and loving guide to help me get through them. You could offer me love and kind reminders that you’re there for me and that you’re safe and loving. You could tell me I’m not really bad and what my family said wasn’t even true. Can you do that?

Inner Critic: Well, sure, I mean why not? We’ll need to work hard on this, just so you know. But come to think of it, a new role might be cool…😎

End: And they lived happily ever after 🙂

Nothing worth while is a one and done

Okay–so as you know, nothing worthwhile is ever a one and done. You have to commit to making a change. Depending on how old you are, that inner critic has been around for a long time and it may take a lot of coaxing to get it to cooperate with you 😊, but don’t give up🏋🏾 🏋🏾‍♀️! If you do something long enough new neural pathways form in your brain and the old ones fade away. Which means, you can leave old, destructive ways behind you, and make new, more positive ways to support yourself.

You have the power 👊 to change old thought patterns–even the inner critic! So as the saying goes: “no pain no gain.” You might say, well that inner critic brat has already done a number on me and now I need to put myself through more pain? Well yes, for awhile, but if you get that voice to start helping you instead of hindering you, you’ll feel so much better–I guarantee it!

That’s all for today, but I’ll be here again next week so stay tuned!!

PLEASE!! Leave me a comment–feedback, you liked it, you hated it (but tell me why) or you tried it and it’s working!

Or, click the button below to send an email!