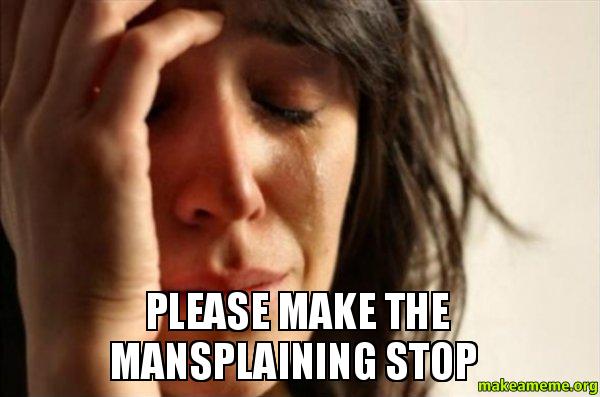 OMG! Mansplaining is the worst! Has it happened to you? Well, here’s what it means. It’s that the never ending sentiment that women are less than men and need over-explaining so the man makes sure she “gets it.” Oxford describes it as: the practice of a man explaining something to a woman in a way that shows he thinks he knows and understands more than she does. Click on the 3 second video below for an example.

Some real life mansplaining is the worst examples

My ex is from Mexico, and would bore the whole family to tears talking about every aspect of Mexico he could think of: history, his family, places he travelled in Mexico, how he was going to finish his college degree, and on and on. I don’t even want to start on what happened after he started taking French. I divorced him because, among other things, I didn’t want to live a life dying from boredom. OMG! Mansplaining is the worst!

Where did mansplaining originate?

The term came about from Rebecca-Solnit’s book: Men Explain Things to Me. She didn’t coin it but her ideas took off and someone came up with the word. What is it? A man feels he has to explain something to a woman in her own area of expertise when she hasn’t asked for an explanation. The topic can be about a woman’s experience, but the man needs to explain her experience to her. In the image below, it says that a mansplainer gets his water from the words, well, actually. Well, actually I think this undermines woman’s confidence and discourages them from speaking up and being heard. It also causes self-doubt, self-limitation and allows men to continue to show a false self-confidence. It’s an emotional intrusion on women’s intelligence, confidence and self-respect.

My boss, the mansplainer

I had a young and upcoming boss years ago who’s style was “hands off management.”This translated into “no involvement with the underlings (his employees).” He never gave us any direction. He didn’t talk to us for months after he was hired. So one day we confronted him and he arrogantly claimed it was still his first 90 days. The First 90 Days is a popular book with advice on what a manager should do during his first 90 days in a new position. I never read it, but I think he skipped the chapter on managing staff.

One day, as we, his staff, walked around aimlessly in our jobs, because we had no direction, we were surprised with a meeting invite. Our boss was going to tell us all the upcoming and exciting events and our new roles. Wow! Some direction finally!

In the meeting “where it happened”

At the meeting, he impressed us by writing important things, in different colored pens, on the white board. He handed out lots of papers with colorful graphs. As he proceeded to mansplain over and over and over again. I, the curious one, after not hearing anything about new roles, dared to ask if he could tell us about our new roles. He looked at me, didn’t answer my question and continued to mansplain. Persisting, I asked again. He didn’t answer the question. He just kept talking. I gave it one more shot, he got angry and managed to give us some mangled response.

In the “quiet room” where it happened after the meeting

After the meeting I hung out and talked with the managers–it didn’t occur to me that I’d done anything wrong. But when I got back to my desk, another manager asked to talk to me. We went into the aptly named “quiet room” and she asked if I was okay. I was confused, but said yes. She then told me I was out of line and that I should never talk to a manager that way. Next she said my behavior (asking a question?) would never be tolerated at higher level meetings. Mansplaining explained and in action. OMG! Mansplaining is the worst and she, a woman, and was staunch a supporter. The clear message to the bright, intelligent, curious woman — listen to the mansplainer only. You cannot be heard.

Not every man is a mansplainer

Rebecca-Solnit states and I agree, that not every man is a mansplainer. You see it most often in white, upper class males and it’s the age old issue of the gender wars. My dad (white, middle class) told me once that after women go through menopause they no longer have value. Women’s value stops after their child-bearing years? Are you kidding me? Isn’t it about the 21st century? Who tell’s their daughters such things? I have five brothers and most of them display this superiority and disdain towards the woman in our family. The apple doesn’t fall far from the tree, as the saying goes. OMG! Mansplaining is the worst!

Have you heard of himpathy?

Another interesting term I stumbled on was himpathy. Kate Manne, a Cornell philosophy professor and author of Down Girl, The Logic of Misogeny, coined the term. In her article, Feminism 101, What is Himpathy? she writes that it is: the inappropriate and disproportionate sympathy powerful men often enjoy in cases of sexual assault, intimate partner violence, homicide and other misogynistic behavior...

When men like these are accused of sexual harassment or assault, the public tends to sympathize with the men’s self-generated dilemmas about how to continue their lives after they’ve been disrupted by their victims. After Christine Blasey Ford accused Brent Kavanaugh of sexually assaulting her when they were teenagers, he said, “my family and my name have been totally and permanently destroyed.” Kavanaugh effectively shifted the narrative onto himself as he emphasized how Ford’s claims tarnished his reputation caused major inconvenience in his life.

In an article from Vox, on Himpathy, regarding Bratt Kavanaugh, Ari Fleischer, past White House press secretary to George W Bush questioned on Fox News whether committing sexual assault ought to “deny us chances later in life.” This disgusts me. I just finished another book called No Visible Bruises and the number of times violent men DON’T get arrested for bashing around their girlfriends or wives is unconscionable. It’s like the police say, “just calm down and work things out.” And these guys do work things out — many times brutally beating and even killing the woman.

Well, I’ve run the gamut in this post. Describing mansplaining and where it came from, examples from my marriage and work, and information on himpathy. I’m pretty sure all woman have been mansplained and if you have guy friends or are married, you might call them out and make a joke of it and that’s good. However, there’s a more serious side to all this. When men mansplain, it causes self doubt, and chips away at our self-esteem.

How to deal with mansplaining

Here are some tips from a Bustle article called: 7 Ways to Deal with Mansplaining.

Leave a comment below or email me your experiences on mansplaining. If you think it would be helpful to someone you know, please share it💗.

Until next week, from my pen✍️to your heart ❤️ — Kathy