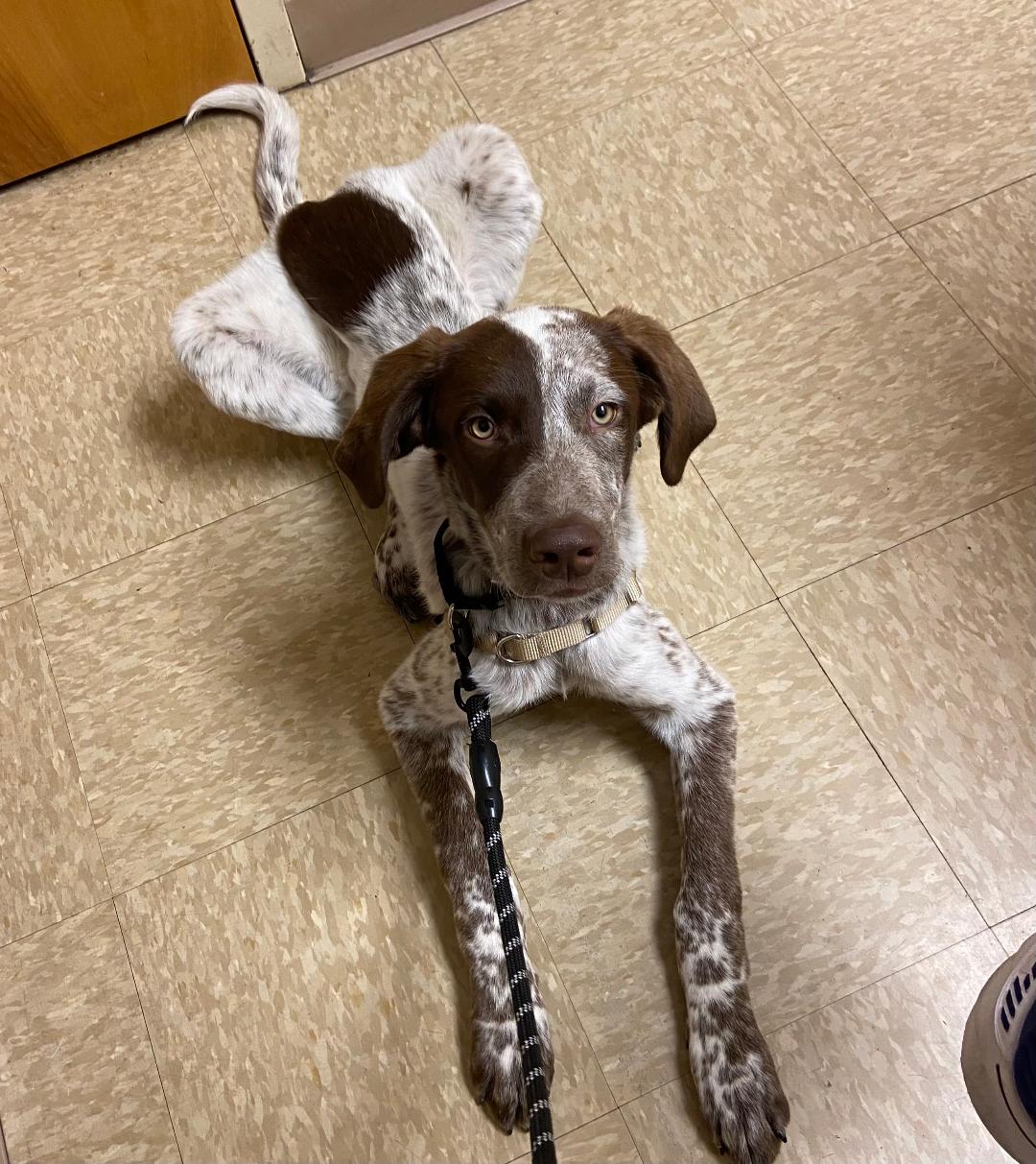 I want grandkids, but you don’t always get what you want when you want it.  I did however, get a grand dog. It’s my daughter’s.  He, Henry makes her so happy. And that makes me happy.   There is nothing like unconditional doggy love.

The beginning of Henry

She took Henry in as a foster dog, but I know my daughter’s heart and she didn’t or rather couldn’t give him back. Why? Because he is this huge lug of utter sweetness.  Don’t ask what breed he is because I have no idea. I’m not one of those people who can name the breed of any dog.  I have a feeling when I meet him, he’s going to jump up (and I’ll try not to topple over) on me and give me lots of sloppy kisses. He seems to do that in all the pictures and videos I’ve seen of him. He probably weighs 100 pounds and when he jumps up to hug someone he reaches up to their head.

I’m not so good with the doggy kisses. Somehow, the thought of dog slobber in and around my mouth doesn’t appeal to me.  But as I told my daughter (well actually it was in a welcome to the family card to Henry, so I actually told Henry we’d work on it, but since he doesn’t read, my daughter or her boyfriend will have to read it to him and they’ll see the issue and understand that Henry and I are committed to our relationship).

She sent me a video of her boyfriend trying to do pushups and Henry jumped right on top of him—all 100 loving pounds and as he struggled to push up, the weight of Henry didn’t let him get very far.  As soon as he’d admitted defeat and stood up, Henry went right for the blanket that he had under him and snuggled right in. He’s a dog willing to fight for what he wants.

Henry snuggled up to my daughter as she was napping on the couch one day and went to sleep with her–taking over most of the couch and covering half of her body in the process. He is a cuddly guy.

My daughter and her boyfriend went on a Pizza Tour last Sunday–they live in New York City–so much to do, so little time. They sent me pictures of gooey, cheesy pizza that they enjoyed on the tour. But the tour lasted longer then it was supposed to so they had to rush home to make sure Henry was okay.  Ahh…the responsibilities of dog hood.

I have to admit, besides the welcome to the family card, I got him a toy—a red lobster.  It won’t get to him for five days and I can’t wait to see their reaction.  I hope they’ll send me a picture of Henry with the lobster hanging out of his mouth.

Falling in love with Henry from afar

They sent me a video of Henry with his dog trainer (I’m all the way across the country in California). Apparently, he got an A+ for how well he learned the hand signals to sit and follow the trainer around. I mean, he did give him a lot of treats for his “good” behavior so I see a lot of money spent on doggy treats in their futures. What was hilarious at the end was how the trainer told Henry to sit, which he did. He gave him his treat and then Henry jumped up and gave the trainer a huge doggy hug and lots of those slobbery kisses. I have to admit, this was the video that propelled my desire to send him a toy and card.

A trip to the vet

My daughter sent me a picture of Henry on his first appointment with the Veterinarian. She/he said they should register him to visit children’s hospitals because of how kind and gentle he is. Talk about melting your heart…

We all need a little unconditional love

My daughter needed a dog. She needed somebody who would give her unconditional love because sometimes she is hard on herself about certain parts of her that are hard to change. Those challenging behaviors we all suffer from. I think we could all use someone who loves us unconditionally like Henry. Someone who doesn’t chastise us because we get angry, argue, are impatient or too critical. Someone who only sees the best in us and is always up for kissing. I’m glad she got Henry. He is good for her heart and soul.  He’s the new superstar of the family.

Until next time! Leave a comment or email me about a great doggy story!