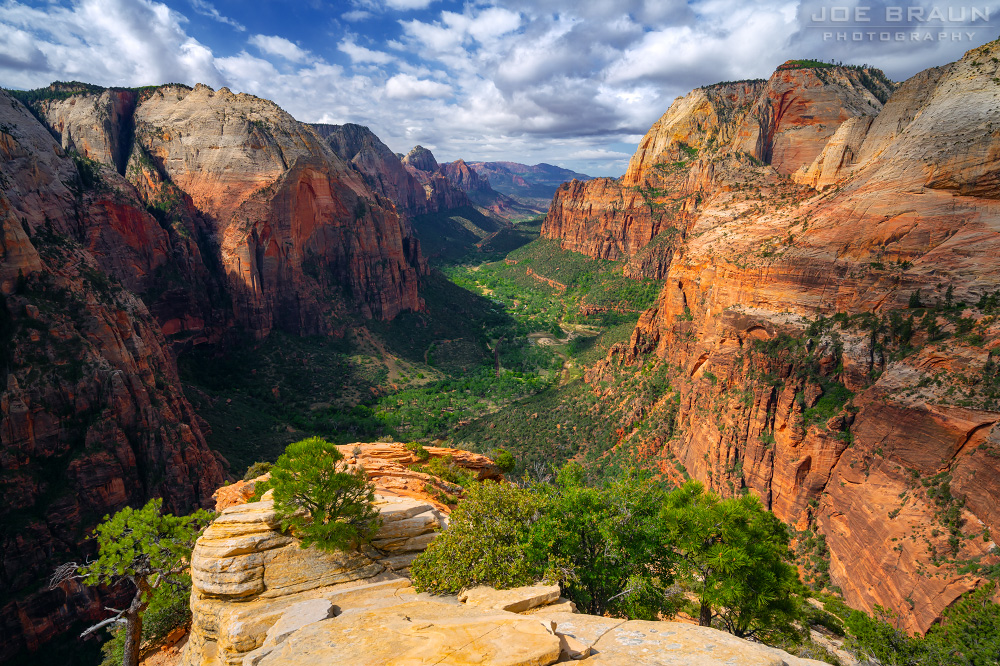 Yesterday I hiked one of the 10 most dangerous hikes in the world –Angel’s Landing, 2.5 miles one way, in Zion National Park, Utah. Below is an image of the two miles of 21 switchbacks you climb before you get to the last half mile which is the “dangerous” part. And if you’re going to hike it I’d advise not asking people who are coming down, when you’re still on the switchbacks going up, how much farther it is. Just assume it’s really, really far.

The real work begins after the 21 switchbacks

The real work begins after climbing the 21 switchbacks when you get to the “launching point,” a rocky, sandy plateau. You’ll be hiking a half-mile of one of the most dangerous hikes in the world. Here’s Wikipedia’s description of it: Angels Landing, known previously as the Temple of Aeolus, is a 1,488-foot tall rock formation in Zion National Park in southwestern Utah, United States. A trail cut into solid rock in 1926 leads to the top of Angels Landing and provides views of Zion Canyon.

I’d done some reading before I went and I knew there were chains bolted along the rocky mountain crags to hold onto, but what scared me the most were the descriptions of the parts that had no chains. That’s when I had visions of slipping and falling to my death. Also, my dare devil older brother said he didn’t even go to the top and so before I went I’d written it off. But as I sat at that plateau, some guy said they had chains “most” of the way up and it was then that I got a whiff of courage and said to myself; “I’m going for it.”

Warning: do not climb Angel’s Landing if you’re afraid of heights

Yours truly is afraid of heights. The perilous trail is one way only, crowded with lots of brave hikers going up and down. We had to stop every so often to let groups come down. I was worried because I was low on water and it was 85 degrees, with an elevation of 5790 feet. I took lots of breaks due to my pounding heart and light-headeness. Many people came by and said: “you’ve got this, you’ve got this.” Mostly younger kids, but I saw people like me, struggling up. My main focus was on grabbing those chains bolted into the mountainside and staying alive. Talk about living in the moment. Occasionally I’d take a furtive glance to my left or right. It was really far down. I stopped again and again to keep my pounding heart from beating out of my chest and assuage my light-headedness.

At one point I stopped. I was scared, thirsty, light headed and I wanted to cry. These nice young men stopped and asked if I was okay. I said yes, but I don’t think I looked the part. One guy asked if I needed water and I said I did. He filled up my 32 ounce bottle (which was down to 10 ounces), and told me I should eat something. I hadn’t eaten for five hours. Another guy gave me an extra bottle of water. I shed a few tears, I have to admit. But feeling grateful and encouraged by their kindness I continued up. I had a few more stops before hitting the top, and encountered many encouraging people who helped lift my spirits and my courage.

Pretty scary, but that’s where I was. And this is what I looked like, see below–not my finest fashion moment, but definitely one of survival of the fittest.

And I made some friends because when I got to the top all these people were high-fiving me and congratulating me on making it. It was funny. We were in this together and it was quite the accomplishment. It was beautiful, but scary still I have to admit. If I looked down too long I’d get woozy.

I felt much braver on the way down, but I still had to stop and rest. It wasn’t as bad due to all my expert experience (ha-ha) and the decreasing elevation.

I met people who made lots of stops going up, who’d felt light headed and cried. Some were even more scared than I was. One girl was frozen and wouldn’t move. Another one, terrified, was being gently guided by her patient boyfriend. She kept apologizing for going so slow. That’s another thing. Don’t apologize for going slow at high elevations, on steep mountainsides, grasping onto thick chains bolted into the mountain side, where one wrong move and you’re falling to your death. Nobody was in that kind of a hurry. In fact I let a lot of people pass when I got to safe points, but no one was pushy. I did feel like a bit of a pro going down, but I still clung to those chains.

As I descended the switchbacks I continued to run into people I’d met along the way. My head was getting big with all the fame I’d acquired. Close to the end of the switchback trail, I met a guy about my age who was resting. He asked how much farther it was. Ha, ha, ha. I had to be truthful — “It’s still a really, really long way.” He was only on switchback number four–17 more to go. He asked if I’d do it again. I exclaimed enthusiastically: “Yes! But not anytime soon.”

Never underestimate your power. Although I hiked one of the most dangerous hikes in the world, you don’t have, but remember, you can do extraordinary things.

I’ll be writing more about my hiking and other adventures for the next few weeks. I hope you’ll join me. Leave me a comment, words of advice or daring adventures you’ve taken. Or email me below.