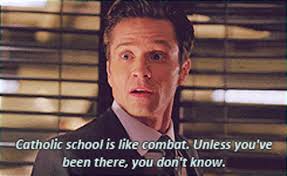 It all started with my name

Being from a Catholic family, it was in vogue to call your child by their middle name. I was Mary Kathleen Kiley and I was called Kathy––until I started 1st grade at Guardian Angels Catholic School in Manistee, Michigan.

In 1st grade, I was four feet tall and weighed a whopping 45 pounds. Imagine me, tiny and trembling confronting the towering, tight lipped nun, dressed in a witch-like black habit, with white starched neck and head gear, rosaries and clanging keys dangling from their waists, informing them that although my first name was Mary, I went by Kathy. The Father, Son and the Holy Ghost would never have sanctified it and the devil wouldn’t have the nerve to even ask.

In 5th grade we moved to Petoskey, Michigan–Alleluia! I would be attending St. Francis Catholic school. I was excited for the chance at real redemption. My mom could tell the nuns I went by Kathy–it’s always good to have mom for backup. By the way, did I mention how much I hated being called Mary? Well I did.

My mom told my new school Sister Mary to call me Kathy. I was there and I heard her say it. I was so happy. My suffering had ended, said no one ever who’d attended a Catholic school. No matter what city, town, state, or school I went to–all nuns serving the Lord would call me Mary. I couldn’t escape my fate. It’s hard to imagine how I survived eight years in a Catholic school.

5th grade and the hated glasses

When I was in 5th grade I got glasses and I hated them. They had ugly brown frames and made made my face look smushed and I was terrified that everyone was going to make fun of me. So, when I went to school I’d forget them from time to time. Or they’d get broken (I had five brothers who terrorized me on a daily basis after all). Or I’d mysteriously lose them–whatever a 5th grader does with glasses they hate.

Blessed to have Sister Mary Sherlock Holmes as a teacher

That year, I was blessed to have Sister Mary Sherlock Holmes as my 5th grade teacher. There would be no contesting any of her evidence because she had divine intervention on her side.

One day, I’d forgotten my glasses. So, I’m sitting there in my scratched oak desk, towards the back of the room, most likely admiring the green chalk boards and dusty erasers that were probably responsible for the world’s asthma cases. Or I was daydreaming about all things Godly, when I got called on.

I didn’t hear Sister Sherlock call on me that day. And she, in her detective glory, announced a discovery to the class. Mary hadn’t answered because she (me) couldn’t hear when she (me) didn’t wear her glasses. Isn’t that odd? Glasses are for seeing — not hearing. At least that was my understanding. I wonder what my dad’s (a doctor) scientific take would’ve been on that? No wonder I grew up so confused.

Sister Mary Sherlock devised a crafty solution– she moved me to the front of the class. She sure showed me. And then she told my mother, my backup, and I got in trouble from her! I was mad at her anyway, because my constant whining about the nuns still calling me Mary instead of Kathy, and pleading she do something about it, fell on deaf ears. Maybe that’s where I learned not to listen.

A big shout out to Sister Mary Sherlock! Now, whenever I go to a class, or a lecture–anyplace you can choose your seat– I always head straight for the front row. If people are talking, I shoot them a dirty look or tell them to stop. And I wear my glasses. I even became a trainer so I could always be at the front of the classroom.

In 8th grade, I got into big trouble one day on the playground. Remember those dirty old black cement places? Basketball court and ten foot steel slides, where if you fell you’d hurl to your death? And the chain-linked swing sets with plastic faded red and light green seats? All surrounded by the two story red brick school and a two story grey-brick convent. And no Catholic school would be complete without the ominous grey steepled church in the background.

One day, I was hanging with my friends on the playground and for whatever reason, I started belting out, Elvis Presley’s rendition of “Ain’t Nothing but a Hound Dog.” I sang into my invisible microphone, swerving my hips, and jumping all over the place. I wore shiny white leather pants, and my white leather coat, and had my long brown hair slicked back. Just kidding-I had on my black jumper with a white, peter pan collared blouse. Even so, I’d attracted some groupies who were ready for some rock n’ roll fun and laughs.

Sister Mary to the rescue

As soon as one of the Sister Mary’s was alerted, she wasted no time in stopping my sinful behavior. I was on the cusp of adulthood (12) and I’d had enough. It was a revolution and I was going to sing! Who did she think she was Elvis shaming me? That’s what they got for calling me Mary when I should have been called Kathy. It gets to a person after eight years.

I don’t remember the exact punishment. Probably no recess for the rest of my life, 4000 rosaries, twice daily confessions and crawling on my knees to daily mass, bloodied and pleading for forgiveness for my vile acts and influencing those immaculate souls on the playground that day. If I was lucky, I’d make it to purgatory, but I’d be there a long, long time and that was no guarantee that I’d make it to heaven.

I not only liked to sing, I liked to talk–in class and outside of class. It all started in 1st grade and continues to this day. But back then, I’d get caught talking in church, and a nun would come by and pull my ear. Ouch! She even did it one time after I’d been on vacation for a week. I guess she didn’t miss me. And I don’t know how many times I had to write 100 times I will not talk in Sister Mary so in so’s class or church or in my sleep (kidding).

After the playground incident, things only got worse. As I mentioned, I was an 8th grade rebel. I got caught talking a lot and was repeatedly punished with the standard write 200 times: I will not talk in Mr. Left’s class, in cursive. None of that copy and paste stuff to make it easy. And when I think of it, he probably didn’t even read it or even count it. All that lost time in my life. It’s hard to imagine how I survived eight years in a Catholic school.

A paddling with the ruler

I’m an 8th grade girl and I still like to talk. My teacher happened to be a man–not a nun or priest–but still a strict Catholic disciplinarian. When the “I will not talk” writing punishment failed at silencing me, I was assigned a “ruler paddling.” This was still allowed in the 60’s. And he even gave me a day to worry about it. I wonder if waiting a day scared me?

The day of the paddling event, I sat anxiously awaiting my punishment. At the appointed time I was called to the front of the class. I had to bend over and experience a whacking in the behind eight times by Mr. Left. He donned a crew cut, glasses, gold V-neck sweater, blue shirt, some kind of tie, and black trousers. The worst thing was the silent jeering and cheering, as my classmates witnessed me at my finest hour. It’s amazing how I survived eight years in a Catholic school.

I hope you had a few laughs as I took you down memory lane and how I survived eight years in a Catholic school (maybe it even jogged a few of your own memories). It probably didn’t feel so great when I was experiencing those spiritual moments, but some would say it helped me build character — or scared the living daylights out of me.

That’s it for this week–join me next week. Leave a comment or send me an email. I’m sure there are many Catholic school rival stories that would make me and others laugh.