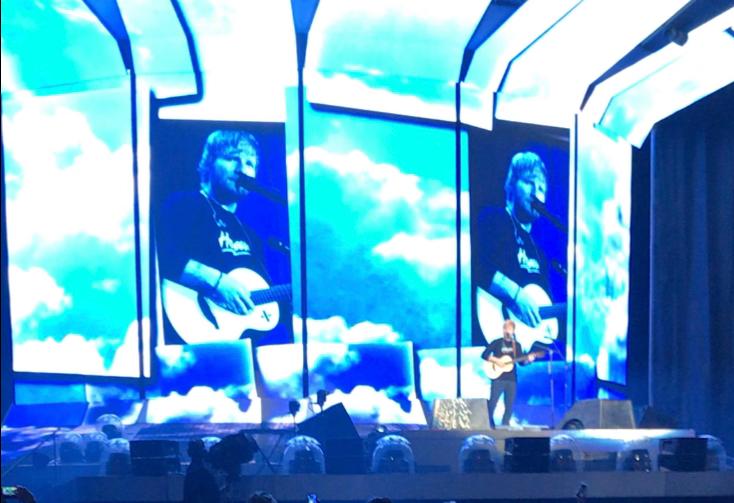 One of life’s best experiences, at least for me, is sitting close to the stage at a concert.  It makes you feel almost as if you’re in an intimate relationship (as in friends) with the megastar. I was 14 rows from the stage (so really close) when I saw Ed Sheeran at the Oracle Center in San Francisco in 2018. The tickets were $250, but I decided to splurge. Also, I rescheduled a three-day workshop I was giving, when I realized the second day of the workshop was Ed’s concert. I needed to leave work early, drive to San Francisco and I wouldn’t get home until 2am. Here’s the rest of the story of how Ed Sheeran taught me to persevere no matter what.

Ed Sheeran’s talent is extraordinary, but not easy.  His soothing ballads lull you with poignant memories of lost love, childhood friends, an old Photograph, a Lego House, Galway Girl, Beautiful People and it’s all Perfect.

He started at the bottom

He started at the bottom, leaving home at 17.  From 2008 to 2010 he was homeless. During the night he’d perform gig after gig on the local London pub circuit and after he finished, he’d hangout until 5am when the Underground opened. He’d ride the Circle Line until noon to catch up on his sleep and then do it all again. Sometimes a friend would let him sleep on his couch too. He never gave up and (spoiler alert), he’s a megastar, selling out concerts wherever he goes. No more sleeping on trains for him.

His performance was almost spiritual

Seeing him perform was a spiritual experience-a feeling of awareness and interconnectivity. I watched as he played his guitar at road runner speed, bouncing back and forth on his loop petal, downing bottles of water and tossing them over his shoulder, singing, dancing, chatting with the audience—just being his delightful self.  I could feel the blood sweating tenacity that he developed as a young singer working his way up and I was living this experience with him. But I could also feel it when he started to wane.  During his encore he was still pushing himself to the limit but as the British say: he was knackered.

I can only aspire to have blood sweating tenacity like Ed Sheeran. Unfortunately, I didn’t get started as young as he did and I didn’t run away from home when I was 17. I graduated from high school and college, got married and had kids–“the full catastrophe” to quote Tevye from Fiddler on the Roof.

I’ve always had my hand in writing (no pun intended), but  it’s only within the last year that I’ve dedicated myself to it full-time.  Five years ago, I got diagnosed with breast cancer – all is well now thankfully.   I have a charming, caring treatment doctor who always asks me how the writing is going. A few appointments ago, she asked again and I said it was good, but that I wished I’d started sooner. She said that some people never get started on their dreams, and then they are bitter and regretful when they get diagnosed with a serious form of cancer. That gave me perspective and I felt grateful to have started, no matter where I am in my life.

How Ed Sheeran taught me to persevere no matter what

I will think of Ed Sheeran’s perseverance as a writer and strive to be good, then better and then the best. Martha Graham, a famous modern dancer and author expresses the importance of living an authentic life:

“There is a vitality, a life force, an energy, a quickening that is translated through you into action, and because there is only one of you in all of time, this expression is unique. And if you block it, it will never exist through any other medium and it will be lost. The world will not have it. It is not your business to determine how good it is nor how valuable nor how it compares with other expressions. It is your business to keep it yours clearly and directly, to keep the channel open.”

So how do you keep your channel open? I read, write, take classes and blog. I’m also looking into publishing opportunities. I’m not making money yet, but I continue to write. People may sneer and think: “I knew you couldn’t do it. Why did you even try?  Excellence is for others, you’re ordinary.” I don’t buy that (and at times it’s my inner critic abusing its power) because it would be a death sentence to quit. I’ll continue – like a river with a fierce current making its way crashing, swerving, and shouting, until it gets to the vast ocean where it has more space and unlimited directions it can go.  I won’t quit – I am a river on my way to the ocean – unstoppable.

And that is how Ed Sheeran Taught me to persevere. Music is who Ed is. Writing is who I am.  It’s always been there, waiting patiently.  I just didn’t give it its due diligence.  But now it has my full attention.

How about you? What should you have your full attention on? And what’s keeping you from it?