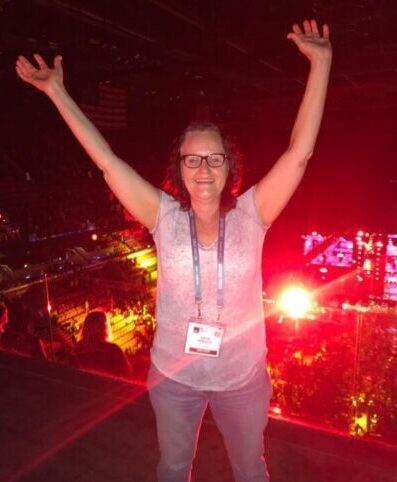 I went to see Kenny Loggins a few weeks ago. As I approached the venue, there was excitement in the air. Friendly staff guided me to the correct seating. The smell of hotdogs filled the air. People ate and drank beer, anticipating hearing “House at Pooh Corner.” What’s not to love? So what’s up with the title, do you create joy or misery in your life? I’ll explain, but first..

Anything can happen when you go to a concert

I was leaving the bathroom, and a girl stopped and asked me if I’d do her a favor. I was startled and curious, but I agreed. She was having her period and asked if I would make sure she didn’t have leakage stains on her shorts. Strange request, but I happily told her, there was no sign of leakage and that she was good to go.

Who are all these old people?

Since Kenny Loggins has been around awhile I saw many of my contemporaries there.    As I scanned the Thunder Valley Casino venue, I saw a lot of old people. White and grey hair, dyed blond (or me dyed brown), some women with great bodies but mostly people carried a little extra weight here and there, including yours truly. There were wrinkled people, people with hearing aids, some bald-headed and some full haired. Some walked slowly, others fast.

A lot of women had colorful summer dresses on. Others wore jeans, some wore hats, others didn’t. I started to contemplate our oldness, my oldness and then I had a beer. The concert started and people were singing and swaying from side to side, and a new perspective emerged.  I imagined everyone being in their twenties and put 20 year old faces and bodies on them. It was fun. Next I endowed them with particular personalities. Oh, those girls are looking around to check out the guys. Those guys are checking out the girls. Some people were looking for the “cool” people and others were scanning the aisle ways for their friends. It was like college and it knocked me off of my lofty, judgmental throne and there was peace on earth.

Do you create joy or misery?

There was a married couple and their friends sitting in front of me and they were loving life. The couple sang, swayed side to side, hugged and had their arms around each other. I was happy just watching them. They encouraged their friends to get up and dance, but they didn’t want to. But that didn’t deter them.

And along came Grumpy

Then the Grumpy’s arrived.I’m not going to say Eeyore. I feel it would be a betrayal of Winnie the Pooh’s integrity. This woman and her husband arrived and sat down next to me. Her husband sat rigidly in his chair, hands planted on his legs, trying his best not to have a good time. It seemed like the wife wanted to let loose, but not with Mr. Grumpy sitting next to her. I didn’t come with anyone and didn’t care what anyone thought of me. I was rocking out to the music.

Happy and Happy rocked on

So as this fun couple–Happy and Happy— thoroughly enjoyed themselves, the woman with the uptight husband leaned over to me and said”. “I can’t believe these two. No one else is standing up in the whole place. Can’t they see that?” I’m not sure what made her think I’d commiserate with her, but I didn’t. And it didn’t seem like her husband was going to put any effort into anything so he was out. I didn’t want to incur her wrath by telling her how joyful I thought they were, so I just smiled and kept watching the show. We were, after all,, going to be sitting side by side for two hours.

I tried to garner sympathy for her–they were right in front of her, but when people in front of me stood up, I stood up too and kept rocking it. She let them ruin her time. Luckily for her, after the show, she found an ally seated behind her, to commiserate with. I politely headed down the crowded aisle not willing to stoke that fire. I love watching happy people.

Kenny Loggins mesmerized us with “House at Pooh Corner”

Kenny mesmerized the audience with “House at Pooh Corner.” The “Happy’s” actually sat down for it, but still swayed. I loved them more. Kenny told us the history of the song. He wrote it when he was a teenager and played it at a party one night. The Nitty Gritty Dirt Band happened to be there and they asked if they could record the song. Kenny wasn’t quite famous at the time and he said “sure!” But a few days later the band called and said they couldn’t record it because the Disney lawyers nixed it.

Kenny had a date sometime later and was lamenting his bad luck to the girl, who as it turned out, was the daughter of the CEO of Disney. So he got to play the son for her dad, who called the lawyers off. Winnie the Pooh was really in the right corner that day.

So a lot can happen at a concert. You may be asked to give the all clear to a girl worried about leakage, you can watch people loving every second of the concert, you can sit next to a Debbie Downer, and you can have a few beers and belt out all the songs you want. And take a stroll down memory lane to the “House at Pooh Corner.” And most importantly, try to create “joy” instead of “misery.” We can all learn from happy people.

That’s it for this week! I’ll see you here next week!

You know the drill–leave a comment or email me!

4 thoughts on “Do You Create Joy or Misery?”