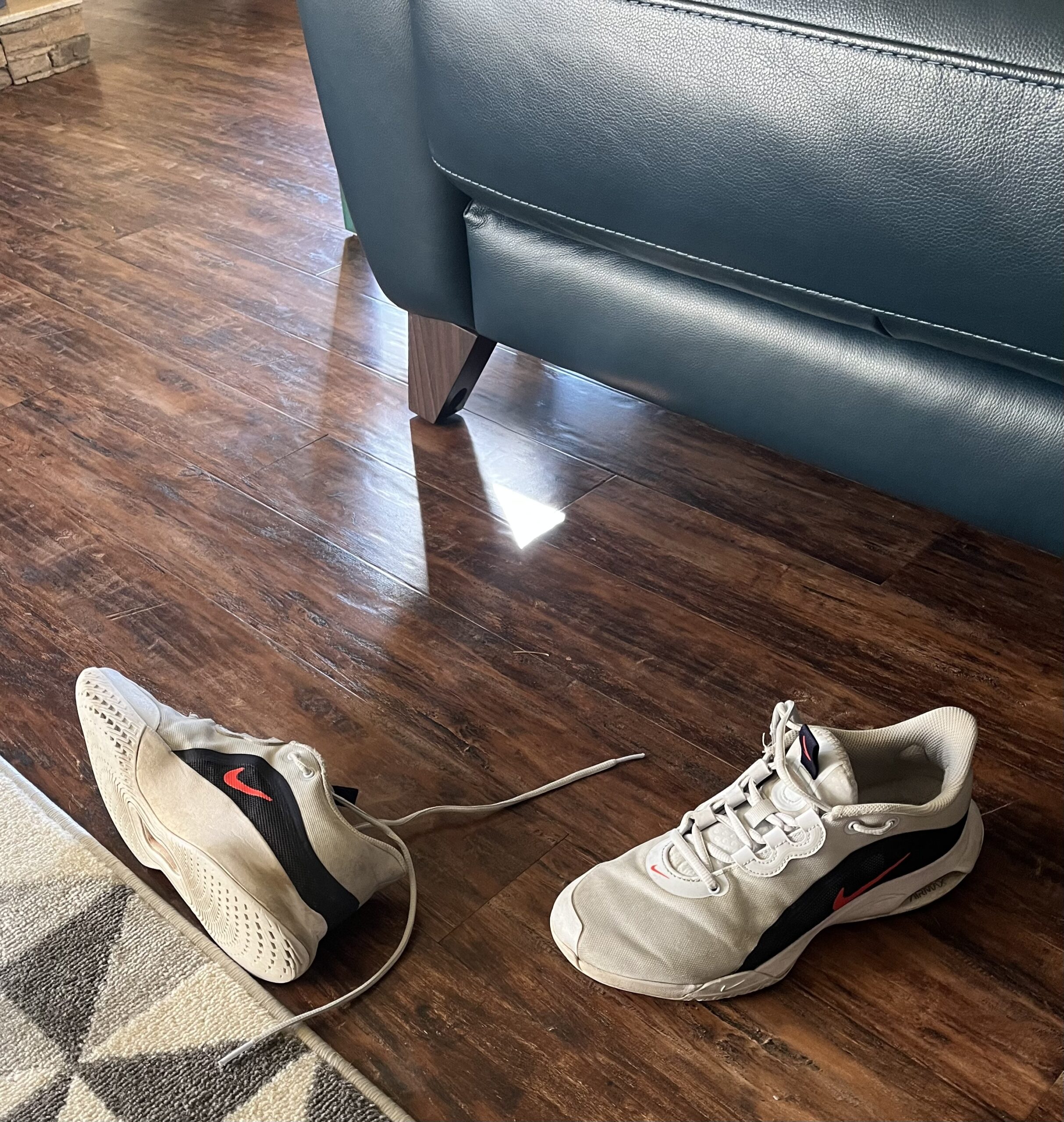 I’m sitting in one of my comfy, gray leather chairs in the living room. Last night, I was sitting in the same chair and I noticed my court shoes staggered near my blue leather couch. I was interested in their meaning to me and so today I sat down to write a story about shoes, life and Pickleball.

I came in from playing Pickleball yesterday and I must have sat down on the blue leather couch and took off my shoes. One is turned sideways towards the couch, and the other is upright and ready to run (image above).

The story of the shoe

I thought the shoes looked picturesque in their own way. They were formerly white, but now they’re inching towards more of a greyish white color. They also have a blue hill like strip on their sides, with a red Nike check in the middle.

I unlaced them because I wouldn’t be able to get them off if I hadn’t. I don’t know what I did after I took off my shoes. Across the room, is one sport sock. I’m not sure if I kicked it over there yesterday or if I kicked it off some other time, from my grey leather chair.

So I look at the shoes and think of the part of me that has a reason to wear them.  I like Pickleball and you need court shoes to play or you’ll hurt yourself.

If I hadn’t bought court shoes, I might have hurt myself and quit.

I play in a competition on Tuesdays (called a ladder) and my shoes are in that position after yesterday’s ladder. During fall ladder, my position was mostly hovering around the bottom. The new winter ladder started me half way up. Could this mean I’ve improved, because the higher up the ladder you are, the better your score is? But reality check, I guess it really means there’s new members who are just learning. But it makes me happy anyway.

I like wearing my shoes to play Pickleball with my friends. We’re from the older generation, if you will, and we get a kick out of playing together.

I got my shoes eight months ago, because that’s when I got serious about playing.

Because I have court shoes, and I wear them to play Pickleball, I’ve met so many nice people and I’ve formed a new community of friends.

Life before I had my Pickleball shoes

Before I had my Pickleball shoes, my life was working full time and taking care of my sick parents. Sadly, both my parents died, and shortly after, I quit my job to become a writer/blogger. But writing can be lonely sometimes and I’m an extravert so being out playing a game with fun people soothes my extraverted soul.

I’ve made some great friends, which I didn’t really have before because of my job and taking care of my sick parents. And I’m pretty sure I’ll keep meeting new and fun people.

People who play Pickleball are happy

People who play Pickleball and wear court shoes all seem to be so happy. In California we have a lot of opportunities to play because of the nice weather. It gets hot in the summer, but we get up early and play to beat the heat.

Pickleball makes people happy also because they’re exercising, playing a game, and hanging with other like minded people.

I’m so glad I bought my Pickleball shoes. They are foundational to my joyful life.