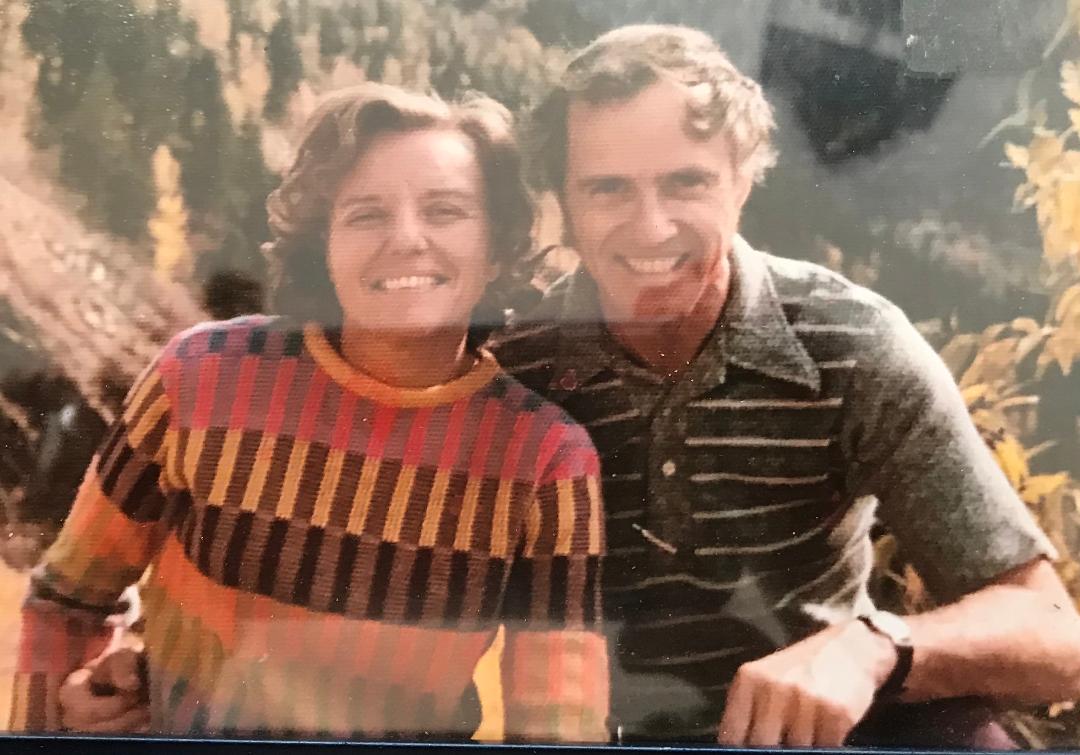 May 10th, 2018, my birthday.  I’d been pounding the asphalt of San Francisco sidewalks, working my way to my daughter’s for a dinner celebration.  I was sweaty, tired and my feet ached. Also, I was lost and catastrophically, only a sliver of my phone battery remained. Desperately I looked for a café among the huge buildings. All I saw was Twitter which did little to console me. Finally, I spotted a tiny café, staggered in and ordered a sparkling water to mitigate my desert-like thirst.  I asked the barista if there was a place I could charge my phone.  He pointed to the greasy spoon restaurant that connected to the café. I took my drink and situated myself on a long wooden bench between piles of cardboard boxes of catsup.

I looked around and felt depressed.  The small narrow kitchen was replete with a grimy grill and a silver hood that hung above it, just like the greasy air.  The cooks, dark haired, one old, one young, dressed in white grease-smudged jackets and hats, glanced at me, as I plopped down on the bench.  “The guy in the café said I could charge my phone here.”  A slight nod of the head.  It smelt of greasy hamburgers, fries, bacon and now my clothes did too.

I sipped my sparkling water, biding for more phone charging time. As I settled into my misery, I absently noticed the Johnny Be Good type music wafting through the air. I paused because something in the melody sounded familiar. It was The Tennessee Waltz and out poured the lyrics:

I was dancin’ with my darlin’ to the The Tennessee Waltz

When an old friend I happened to see

My friend stole my sweetheart from me

I remember the night and the Tennessee Waltz

Now I know just how much I have lost

Yes, I lost my little darlin’ the night they were playing

Memories of a Mother in Heaven

It was my mom’s favorite song! She’d told us years back that she loved Sweet Caroline and that became the official mom theme song.  And we overpowered her with it, making sure we played it loudly, over and over again at family gatherings.  But she also loved the Tennessee Waltz. Oh my gosh! My mom, who died the month before, dropped in to wish me a Happy Birthday.  I texted my siblings to spread the good news. Their responses were lukewarm, but it didn’t matter. I sat there thoughtful, tearful and grateful as I swayed from side to side to the smooth, sultry voice of Patti Page, singing The Tennessee Waltz.

Who my mom was

My mom, with her lulling southern accent and Rita Hayworth beauty was born January 12, 1930, in Pulaski, Virginia.  She talked like a star and looked like one too.  But, despite her goddess looks, and alluring charm, she was humble, and extremely gracious.  She was nice to everyone – except my narcissistic now ex-husband, who after our divorce, continued to cajole the courts for ten years with fakelore (not folklore) of his imaginary poverty. The courts, in their mocked-up justice, opened their judicious arms warmly to him, and let him file motion after motion for ten years, until I finally called it quits and let him keep his dirty money.

Mom to the rescue

One day, four years ago, my parents and I arrived at yet another hearing on spousal support. The Justice Administration allows emotionally abusive and unstable husbands to use the court as their playgrounds to bully and torture their wives who just want the support their owed and to be free of their husband’s strangle-hold on them.

This day, my gentile, southern mom, showed up in an uncharacteristic way.  As we approached the court steps for our hearing, the ex was standing there and greeted my parents as if they would be happy to see him.  I started spurting off in anger at him as my dad tried to calm me down. But my mom, stance secure, eyes locked in his, teeth gritted, said: “What is wrong with you?  Why are doing this? Look at all the unhappiness you’re bringing to your family.”  He pleadingly lied: “I–I just don’t have the money — I can’t pay.”  He then strutted up the stairs, cowardly bravado intact.

My mom, teeth gritted, said to me: “I just hate the way he makes you so unhappy. He is just a jerk (my mom was not a swearer)!”  This was not common for my mom and I was pleasantly shocked!  I felt very loved and so proud of how my she handled herself in that distressing moment.

Her behavior was especially surprising because she was not an opinionated woman. In fact, like many women of her generation, she was the keeper of peace, and would change her opinion immediately if someone – like my dad, got angry at her for disagreeing or stating a different point of view.

She was nice to every else

She was nice everyone else.  One time my son sent her a thank you note for the nice birthday card she’d sent him.   She was so touched by his card, she sent him a thank you card for his thank you card.  My son was touched too — “I can’t believe gran sent me a thank you card to my thank you card.  That’s never happened before in my life.”  That was my mom—overly appreciative for any kindnesses that came her way.

A bit about dad

Even at 92 my dad was demanding, critical, covertly needy and had a low threshold for patience. I was at home visiting one time and was helping him write something on an anniversary card for my mom. He couldn’t do it alone because his eye site was shot. We were in the den and my mom, who was suffering from lung cancer, popped her head in.  My dad looked up at her and viciously blared: GET OUT OF HERE! The look on my mom’s face of dejection and disconsolation impaled my heart. I immediately yelled at my dad, “DON’T TALK TO HER LIKE THAT! SHE’S SICK FOR GOD SAKE!” He later back handedly apologized.  He loved her, and needed her more than he could ever admit, but he could be so harsh with her. It was unbearable to see her kind gentle spirit struck down so cruelly.

She always did my dad’s dirty work.  When we were little, we’d take a ski trip every year.   There were seven of us and we’d make the two day drive from Manistee, Michigan to Jay’s Peak, Aspen, Vail, Winter Park, Jackson Hill.  My dad never wanted to pay for two hotel rooms, so when we went to a hotel, most of us would duck down in the station wagon and my mom would go ask the hotel clerk for one room for her, my dad and two or three children.  It would embarrass me so much! And one time we got caught.  We probably weren’t the only ones who ever tried to pull this off. Me and my siblings were forced accomplices in a small-town crime at the local motel.

My mom was obsessed with golf and bridge.  She always wanted me to learn bridge and I wouldn’t.  I hated golfing, but the rest of the family – eight of us altogether, loved it, so she had plenty of fellow golfers.  My brothers were always helping her with her swing or her putting. They treated her so kindly, like the priceless treasure that she was. However, she was a golfing force to be reckoned with.  She got a hole in one on Mother’s Day.  She also earned a STAR on the golfers walk of fame at Buffalo Hills, a golf course in Kalispell, Montana, where she had golfed for over four decades.  I felt so sad after she died. Maybe I should have stepped up to play Bridge or gone golfing with her.

I thought she didn’t have many good friends, but I was surprised one time, when she told me she had a best friend and her name was Pat.  She golfed three or four times a week and she had her golfing buddies.  I met them for the first time at her funeral.  They were in awe of me – they kept saying I looked just like her, which was a total compliment.  Even in her 80’s she was a beauty.  And that southern charm… They all wanted to talk to me and I wished I’d given them more time.  Every time I walked by their table at my mom’s wake, they looked like they wished I would sit and chat with them for a while.  I was busy drinking and chatting with an old high school buddy – another lost opportunity to hear about my mom from her golfing friend’s perspective.

She also did her best to dote on us and the cavalcade of friends we bought home.  Even after we’d all gone to college, got married and came home to visit, she’d still be there, taking care of everyone, but we all started to help her so hopefully her burden was a bit lighter.

What my mom did after the last kid went to kindergarten

I asked her after I’d had my kids, how she felt when the last kid went off to kindergarten.  She said she’d had all these plans to decorate the house, clean it out, do home projects, but she said: “instead I went golfing. “ I laughed so hard and completely understood.  She spent years taking care of eight kids, and finally the last one’s off to kindergarten and it’s like she’s out on parole. What’s the most logical thing to do? Go golfing of course!   I’ve inherited her lack of housley organizational skills and prefer to read, write, go outside – anything but deal with the skull-drudgery of house cleaning.

So cheers to you mom and the Tennessee Waltz and thanks for dropping in on my birthday. Feel free to drop in anytime–I’ll be waiting.

I hope you enjoyed today’s blog. Please drop in again on Thursday. Until then, leave me a comment or email me about memories of your mother, who’s in heaven or who’s still here with us on earth.

2 thoughts on “Memories of a Mother in Heaven”